Innovation is complex. Finding a common set of shared priorities increases its effectiveness

One of the most enduring myths of innovation is that of the inspired genius. “Eureka!” (I’ve found it) exclaimed Archimedes as he ran, naked and dripping wet, around the streets of Syracuse. Da Vinci would have been unimpressed by the display. “Where there is shouting, there is no true knowledge,” he’d probably mutter into his beard, trying to get back into The Zone while doodling his designs for the helicopter. On a rooftop nearby, Tim Berners-Lee is being struck by his HTTP lightning flash, single-handedly ushering in the Digital Age…

This is not how innovation happens. Innovation occurs in the dizzying interplay of forces across all levels of society. I’m not an economist but the longer I work in innovation, the more I believe that it’s economics all the way down.

While the socio-economic landscape of innovation is complex, there appears to be a Golden Thread running through everything that we can use to increase the clarity and effectiveness of the concept.

What is an economy?

An economy is a system of interaction or exchange. A simple model describes an economy as being composed of five levels. I prefer to think of these levels as layers of an onion, or gobstopper, the outer containing the inner.

From the outermost layer to the centre these are:

Each layer contains agents that make decisions or choices. In the International layer, an agent might be a nation-state, perhaps. In the Government layer, it might be a specific department, agency or district. In the Business layer, agents might be commercial or not-for-profit organisations, industrial bodies, or perhaps groups inside an organisation such as the board or the IT department. In the Household layer agents are groups of people living together.

Individuals are, well, you and me. Behavioural Economics has a lot to say about the decision-making, conscious or unconscious, conducted in this layer. Economics of one sort or another, all the way down.

So, if an economy is a system of interaction or exchange, across multiple layers of society, each populated with decision-making agents, then it is these decisions that are the critical actions causing innovation, or stagnation.

The interplay of micro and macro

The decisions of individual agents at a micro-level influence the pattern of the macroeconomy. Much like the complexity seen in a murmuration of starlings: the flocking behaviour appears both random and somehow choreographed. It is a function of the interaction of agents (starlings) who each follow simple rules.

Simple decisions made by each individual starling combine to generate complex behaviour at the more macro organisational layer. Individual decisions, conscious or unconscious, and the behaviours that subsequently flow from them, influence the pattern of the whole organisation.

This complexity from simple rules may be studied in the abstract in Conway’s Game of Life. This mathematical model relies on the notion of cellular automata – cells on a flat, infinite, spreadsheet-like grid that are programmed with simple rules relating to when cells should live, die or be born. For example:

Then a set of cells are turned on by the ‘controller’ to act as a seed state. The model is then activated, stepping through a generation every second or so. Much like the murmuration of starlings, the Game of Life produces complex patterns from simple rules.

Sometimes these patterns, subject to the initial placement of seed cells, achieve a sort of life of their own. Patterns travel across the grid. Sometimes a type of flocking behaviour is exhibited. Other times parts of a pattern may be seen breaking off to join with other escapees to create new patterns of their own together. 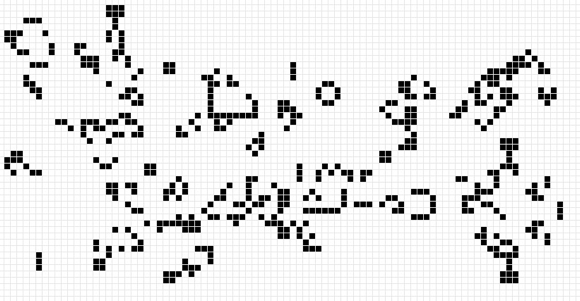 In this admittedly simplistic model, the grid represents the macro, outer layers of the economy. The cells, agents or starlings representing the micro inner layers. The rules represent the decision-making of agents in any layer. The relationship between the structure, rules and seeds is critical in determining whether patterns will flourish or die off.

When it comes to innovation in this sort of economic model, the relationship between the macro/outer and micro/inner layers is critical. States and businesses are social organisms. A lone starling, regardless of its genius, can’t hope to influence the macro pattern.

When it comes to innovation in the real economy, the State has an important role. As one of the outermost layers, it contains many others within it.

The State has a history of taking on risks associated with unproven, technological innovation: aviation, nuclear energy, computers, the internet, GPS, nano and biotechnology amongst others. While conducting her research, economist Mariana Mazzucato said “The more I looked (into the economics of innovation), the more I realised: state investment is everywhere”. There is a strong precedent for an ongoing innovation relationship between the state and agents in other layers of the economy.

While not a new concept, innovation economics espouses exactly this sort of relationship. Joseph Schumpeter introduced the notion of an innovation economy in his 1942 book Capitalism, Socialism and Democracy. In contrast to his contemporary John Maynard Keynes, Schumpeter contended that evolving institutions, entrepreneurs and technological change were at the heart of economic growth, not independent forces that are largely unaffected by policy. This perspective seems particularly apt given state investment in innovation since the publication of his book.

Innovation by agents across various layers of the economy, from the international to the individual, appears dauntingly complex. So how might we practically approach it?

In our experience with a wide range of organisations, there seems to be a factor common to the most successful innovation initiatives. Much like Conway’s Game of Life, or the murmuration of starlings, it turns out to be a simple ‘golden thread’ that links the layers of the economy: shared priorities. 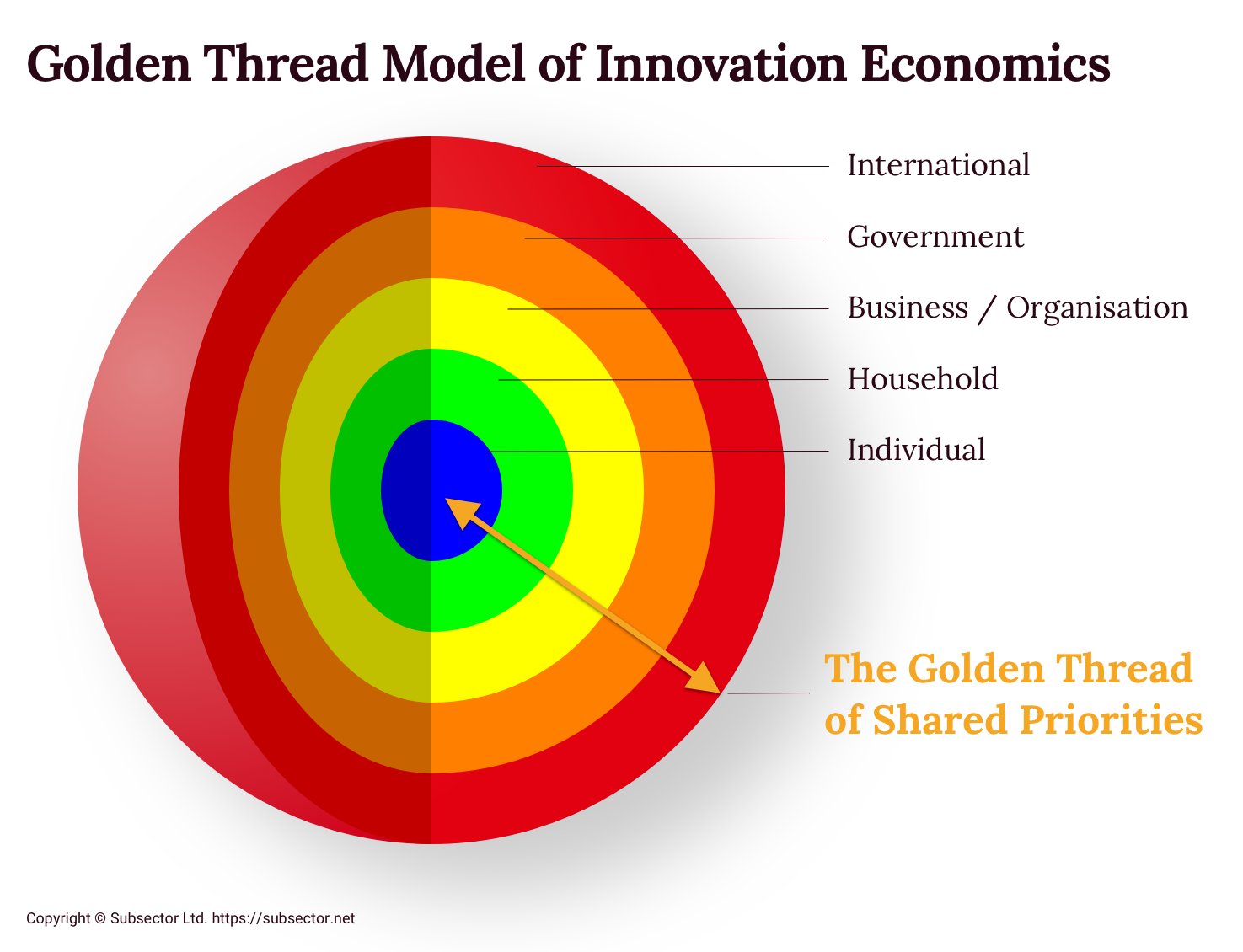 While beyond the scope of this article, systems for translating shared priorities between the layers of the economy, like our current version of capitalism, might be said to be performing poorly. Even DAVOS are promoting the need for a new kind of capitalism.

What does seem to work well, however, in achieving shared priorities, is a systematic approach to group decision-making. Daniel Kahneman, Nobel Laureate for Economics and “grandfather” of behavioural economics, has found that groups tend to make better decisions when supported by algorithms. Our experience with the N2D Method also bears this out.

One of the benefits of an algorithmic, systematic approach to group decision-making is that it can make it very clear to participants what their shared priorities really are. It will make it equally clear where priorities aren’t shared too, which is often just as valuable in avoiding over-commitment to a particular course of action. Algorithmic systems can reduce subjectivity, bias and the ‘noise’ associated with deciding what to do next.

A general health warning though: with algorithms as with most systems, it’s garbage in, garbage out. A repeatable system is only as good as the quality of the inputs.

Innovation occurs across all layers of the economy, from the international to the interpersonal, and is rarely achieved by a lone genius. The complexity of innovating in this environment can be daunting. The golden thread of shared priorities can increase innovation effectiveness between these layers. Systematic and/or algorithmic approaches to group decision-making are effective at achieving such a set of shared priorities.

For the latest insights from DisruptionHub, sign up to our weekly newsletter.

A Commitment To Care: Can AI Help Save The NHS?

Take Me On? The Job Market In A Recession

Why You Should Be Thinking About Distributed 4.0

The Crucial Role Of Digital In The UK’s Economic Recovery

Say What? An Industry Update On Conversational AI